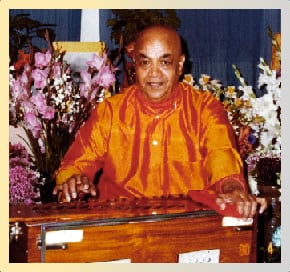 The Science of Thaan had its greatest exponent in Thaan Sen, the Master songster, who flourished in the heyday of the Moghul Empire under Akbar the Great. Thaan Sen was Akbar's Court musician and a great favourite of the Emperor. He developed this intricate science to the highest peak of perfection ... A great living exponent of this science of Thaan was Swami Nada Brahmananda.

Swami Nada Brahmanandaji has attained a rare mastery over this most difficult science by an extremely painstaking and arduous period of discipleship under masters of the Thaan Sen Gharana. Chiefly he attributes his knowledge to intense training under two masters, viz., for a period of three years under the venerable Alladiya Khan of Kolhapur State, and under the aged Tata Bua of Banaras for another period of seven years. These were years of unremitting toil, training, personal service and laborious practice. Nada Brahmanandaji practised day and night. He could hardly get enough sleep. He kept practising far into the small hours of the morning. He has now attained such a degree of mastery in this line that he shines as a unique phenomenon among exponents of today. He manifests an amazing control over the vocal system. Manipulating his articulation in most intricate manners to perfect and split second timings, he is able to produce Thaan of astonishing types that could be hardly thought capable of being produced.

The secret of Nada Brahmanandaji's genius may be said to lie in his control over the rate of vibration and its location in any part of the body at will. By this technique it is claimed that various diseases affecting different parts of the body can be cured as well as prevented through this internal vibration. The impulse of vocal vibration is diverted along any limb or the trunk to any part of the anatomy even as a current of electricity is directed along the circuit to any desired place or object. The peculiar feature here is that the vocal vibration thus directed is of the same rate of the corresponding Thaan that is being produced by the singer at a particular moment. Swami Nada Brahmanandaji is himself a living testimony to this claim and he has not known a single day of illness.

The Modern Taansen of India, he has perfected the Science of Taan (the stretching and weaving of notes in rapid succession), mantra chanting and the invocation of God's name. He has studied with Sri Sadasiva Bua, Karnataka of South India, Ustad Ali Khan of Kolhapur and Tata Bua-ji of Banares. He has given his rare gift to only a few.

Swami Nada Brahmanandaji was an encyclopedia of vedic hymns and nada yoga. His name and achievements have been written in every language in India. He was always humble and never boasted about his achievements.

- as related by Swami Anasaktananda

‘Basraj’ was Swamiji’s name by birth. He was born in Karnataka in 1896. He was a rare soul. He knew that if one wants happiness one has to look in the right direction.

He claimed that he never passed anything in school and often used to say to Swami Anasaktananda that ‘everything zero’ and ‘music one hundred percent’.

At a very young age a marriage was arranged for him. At midnight after the marriage he slipped away. He did not want the responsibility of wife and children and all of the worldly distractions and entanglements that go with the life of a householder.

Swami Nada Brahmananda wanted music and music alone. His family were business people and he left that situation to pursue a life of devotion to music and Nada Brahma. He distanced himself from people who did not remain true to the traditional music tradition.

His first teacher Sri Sadasiva Bua (Karnataka) said that he would never become successful. That same teacher had to shave off his moustache when Basraj did indeed become very successful. He became the court musician to the Maharaja of Mysore.

He lived with Tata Bua (Varanasi) for five years before receiving the first lesson. However, during this time he was constantly listening to the master whilst he was doing karma yoga.The teacher’s wife asked: ‘Basraj has been serving for five years, and still no lesson?’ to which Tata Bua replied ‘Aah. I was waiting for you to ask!’

Parvati, an American lady from California was attracted to the music of Swami Nada Brahmananda whilst visiting Sivananda Ashram in the early nineteen seventies. She told Swami Nada that he was ‘like a bird in a cage’ in his room at the ashram.

Swami Nada sent Parvati to South India, Karnataka, to learn to cook for him before going with her to America. He told Swami Chidananda that he wanted ‘to see Chicago!’ He never left the ashram without the blessings of Swami Chidananda. He believed in the old Vedic texts and vaidhika dharma, or righteousness. He spent around seven years in the United States (from 1974) teaching and giving programs and satsang. He was very popular and attracted much attention, so much so that he was awarded a special pension from President Ford, should he choose to remain in the USA.

Swami Nada Brahmananda had acquired some extraordinary capabilities from his proficiency in the science of Nada Yoga. Researchers from UCLA and Ottawa University were intrigued and carried out laboratory studies on him.

Swami Chidananda eventually brought Swami Nada back from America to the Sivanand Ashram at Rishikesh. He had very few disciples because few could learn under him. Swami Anasaktananda became a trusted disciple whom he wished to become successful in the art of Nada Yoga and was very proud of him. Swami Anasaktananda first met Swami Nada at the Yoga Retreat in the Bahamas when he first went there (around 1975).

His family left money for him which he used for building the Vishwanath temple, and other buildings, at the Ashram. He left all his money to the Sivananda Ashram, Rishikesh. He also founded an ashram in Dehra Dhun.

Swami Anasaktananda lived with him for several years at the Sivananda Ashram, Rishikesh and brought him to Australia for one year, in 1988

He preserved his energy, ojas shakti, and lived to ninety eight years of age when he took ‘jal samadhi’ by going into Ganga Ma (1993).