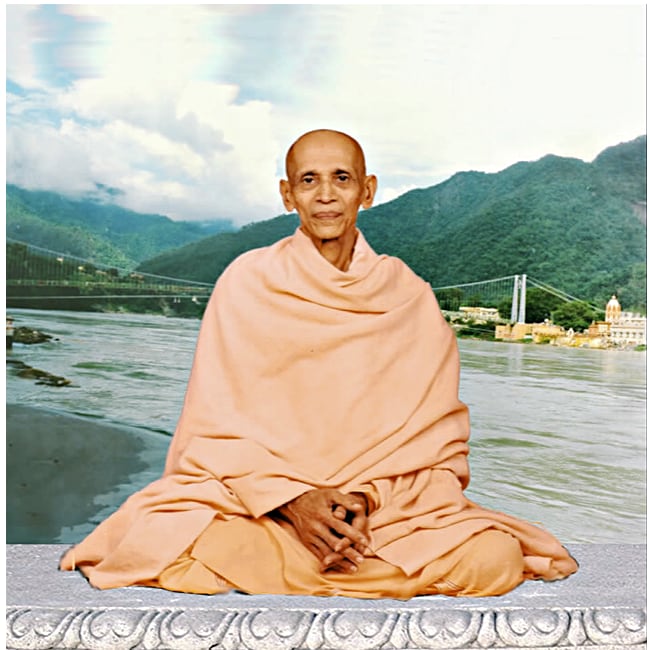 Sri Swami Chidananda (1916 - 2008) was 'boldness of spirit behind a slender appearance, irreversible command of heart behind a benign face, unwavering peace of mind behind dynamism of action, impersonal detachment behind personal love and care, all at once in a single person'.

Sri Swami Sivananda said about his spiritual son and beloved disciple: 'Chidanandaji is a jivanmukta, a great saint, an ideal yogi, a parabhakta and a great sage. Swami Chidanandaji is all this and much more. He was a great yogi and saint in his previous birth. His lectures are the outpouring of a saintly heart. The revelations of intuitive wisdom. He is a practical Vedantin. His words have tremendous power. He was born to fulfill a great mission.

The ideas and teachings of Jesus Christ made a deep impression in his heart and he was able to synthesise them with all that was best and noble within Hindu culture.

Ponder on These Truths

Meditation can never be made easy

The great subject of meditation, which we have the good fortune to consider now, is one which provides the ultimate solution to the greatest problem which has faced and challenged mankind ever since the dawn of Creation, the problem of life as well as of death.


Meditation solves the problem that menaces the individual making him look upon life as fraught with bitterness, pain and suffering. It transforms life once again into a meaningful and a deeply significant and wonderful gift from the Supreme to the human soul. The key to this transformed view of life and the transformation in the very experience of life is, in a single word, meditation. The problem of death is solved, for meditation bestows on you all awareness of your true nature, the realization of your real Self which is deathless and immortal. Thus it takes you beyond all fear of death and frees you from terror.

Outwardly, due to the limitations of your physical frame, you are finite. Your powers also are limited. Your intellect is bound by the necessity of basing all conceptual activity upon name and form, for without name and form mind cannot conceive of any idea. Therefore, the very function of your intellect is possible only within the framework of name and form.

Whenever thought comes, it takes the support of either a name or a shape or form for its very sustenance. Deep within, beyond the limiting factors of the body and the mind, you have your unlimited Self. It is that Supreme Consciousness that struggles to express itself, but cannot. Why? The channels of expression are limited. The truth of your Self, your innermost infinite Essence, is contained within these finite channels and is thwarted in its effort to find effective unhampered expression for itself. Meditation releases your Inner Being from this bondage.

Through meditation you find the dynamic force that breaks the bonds of the intellect and you transcend the intellect and go beyond it. Meditation leads you to that unique spiritual faculty lying deep within each human soul, the faculty of intuition, which is also called the occult third eye, or the eye of wisdom. That faculty alone is the rightful and legitimate instrument of the soul. In error you make use of the mind and the intellect which are, at most, the instruments of the 'I' within you. This 'I' or the individual ego, this little personality, this name, this form, this individual being, confined by the numerous limiting factors of nationality, race, caste, creed, height and colour, this erroneous 'I', is transient and false. The real 'I' within is the true Self which shines radiant beyond the veil of error.

The true Consciousness, becoming associated with this veiling power, with this erroneous perception, and vitiated by that association, identifies itself with the temporary name and form and knows itself as something which it really is not. To this false identity, the intellect and the body have become channels of expression. They may be adequate as instruments to this little 'I', but for You, they are all too inadequate. The Supreme Being which has brought You into existence has given You an instrument for expressing Your Reality, an instrument par excellence and that inner instrument is intuition.

To awaken and develop intuition and to release the vast infinite power that lies within you is the purpose of meditation. In its ultimate stages, that is what it achieves.

Life Is Meant for Meditation

Great souls, especially the mystics and the saints, have been so very enthusiastic about meditation and so very partial to it, that some of them have even declared that man was created in order to meditate. The function of meditation is recognized as the sole and proper function of the intellect. All other aspects of life have value only if they try to equip you for the process of meditation. These great people see life not as a vale of tears, not as a forest full of thorns and brambles, but as a great highway leading to the greatest blessedness. They regard human life as a great gift bestowed by God, and say that life is meant for the experience of infinite bliss and peace which is not of this earth, which cannot be described, which human mind cannot comprehend, which passeth all understanding. To this end, therefore, man is asked to meditate alone that he can fulfil his life and justify the receipt of this great gift from God.

Meditation and meditation alone (no other process has been discovered since Creation) has the power to reach up to the ultimate God-experience. St. Teresa of Avila, a mystic of great spiritual eminence, called it the Royal Highway to Heaven. She meant by Heaven the experience of God, not some region created in outer space beyond the clouds. St. John of the Cross said that meditation was the Key to Blessedness, the Key to Immortality. St. Francis de Sales, a great devotee and a great lover of God, said that one of the processes by which he exercised his love for God was inner meditation. He deemed it the Portal which led to the Mansion of Blessedness. Meditation is the pivot and the central process of all Yoga.

Thus the process has been described by all the mystics, mystics of the East as well as of the West, and even now the followers of the Taoist philosophy in the Far East (in China and Japan) swear by meditation. They affirm this to be the only process which can take man beyond this limited empirical existence and make him deathless. Its origin is to be found in India. The name which has been given to it in India is Dhyana and that name was corrupted when it travelled outside the land into the Far East. Now, on the West Coast of America, it has become very fashionable as Zen Meditation, which is actually a redundant expression. The sad fact is that the great majority of the modern American Zen-fanciers have totally missed the true significance of this tremendous way of Dhyana.

Meditation is a subject of the most vital importance to everyone who wants happiness and peace, who wants to find strength within, who wants a truly integrated, radiant and magnetic personality. On every level of your life, meditation brings rewards in terms of your true spiritual nature, in terms of the spiritual experience which it bestows upon you.

The true purpose of life.

Enquire who you are, know thyself and be free. That transcends all of the sorrows, miseries and limitations which this earth life imposes upon you. In one word the goal of your life is the realisation of the Supreme Reality. You may call it what name you will. Call it the Self, call it Cosmic Consciousness. The achievement of this alone will give you permanent happiness. The ancient vedas have from time immemorial sought to bring home to mankind the oneness of all life. We have a declaration in the vedas, duality is the cause of all sorrows.